Better and funnier definitions and real meanings of some common words in English - smile and learn at the same time! 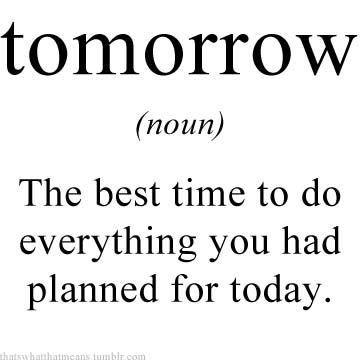 ADULT:  A person who has stopped growing at both ends and is now growing in the middle.

BATHROOM: A room used by the entire family, believed by all except Mom to be self-cleaning.

The Global Language Monitor estimates that there are currently 1,009,753 words in the English language. Despite this large lexicon, many nuances of human experience still leave us tongue-tied. And that’s why sometimes it’s necessary to turn to other languages to find le mot juste. Here are fifteen foreign words with no direct English equivalent.

1. Zhaghzhagh (Persian)
The chattering of teeth from the cold or from rage.

A smiley is a sequence of characters on your computer keyboard. If you don't see it, try tilting your head to the left -- the colon is the eyes, the dash represents the nose and the right parenthesis is the mouth. Smileys usually follow after the punctuation, or in place of the punctuation, at the end of a sentence ;-) A smiley tells someone what you really mean when you make an offhand remark. They're also called emoticons because they are "icons" which convey "emotion."

New generations of smileys continue to appear on the scene and NetLingo keeps tracking them down. The so-called "modern smileys" (which look like graphical smileys) are known as emojis. There are also straight-on smileys which are considered another form of ASCII ART because you do not tilt your head but rather look at it straight on, such as @(*0*)@ for a Koala and {=^;^=} for a cat.

Check out this video below by DNews on Youtube

Here are the 79 most commonly mispronounced words in English.

Here are 107 words specific to certain regions such as Indiana's "pitch-in dinner", England's "loo", and Ireland's "to rabbit on." Video by: Mental Floss on Youtube

Ahhh the joys of Monday morning. For many of us it means a combination of waking up early, commuting to work, taking that first coffee of the day, meeting with our boss, switching on the PC, and start working. Anyway, did you know that there are several idioms and expressions using the word "Monday"? Here are the following:

English is one of the most difficult languages to learn. Nowadays, many countries include English as a second language in their school curriculum and children start learning English at a young age. However, do you know why learning English is so important?

This funny video shows the importance of English language in the workplace.

ENGLISH LANGUAGE IN THE WORKPLACE: VIDEO

Then the right way to spell POTATO should be:
GHOUGHPHTHEIGHTTEEAU

This is a one-stop cure for all your spelling ills. Here is the list of words that are most commonly misspelled ('misspell' is one of them).